The M002 Mount need to be raised above a tripod top for it to work with various telescopes. Use a Stellarvue MEC column to accomplish this. Our columns are made of heavy duty 6061-t6 aluminum 2 3/4" in diameter and 11 1/4" long. They weigh 2.4 pounds and hold the M002C mount head rock solid.

Attach the appropriate column to your tripod then attach the M002C mount head to the top of the column using the three 1/4-20 screws that come with the mount head.

Based on your tripod select the correct column from the list above.

MEC Column Only: Use this column with our current Denali tripod as is shown when you select the MEC Column Only option above. This new version of the Denali comes with a top that now has its own base with three side holes. The column fits over the top and attaches firmly with three 1/4-20 side bolts. If you have one of the older Denali tripods that do not have an extended base use the MEC 003 below.

MEC003 Column and Base: If you have a heavy duty camera tripod that uses the standard 3/8-16 bolt you will need this column. Use this column with the former versions of the Denali Tripods that have only one 3/8-16 center hole on top with a mounting bolt pointing upward. If your Denali is the newer version and has an extended base at the top with three side holes use the MEC Column Only above.

MEC010 Column and base: Use this column on most import telescope mount tripods including Vixen tripods, the Celestron AVX/GP tripods and many others. Measure the diameter of the attachment bolt on the tripod. It should be slightly less than 10 mm indicating it is a metric M10 thread.

MEC012 Column and base:  Use this column on larger import tripods that use a metric M12 bolt (such as the Celestron CGEM).  Measure the diameter of the attachment bolt on the tripod. It should be slightly less than 12 mm indicating it is a metric M12 thread. 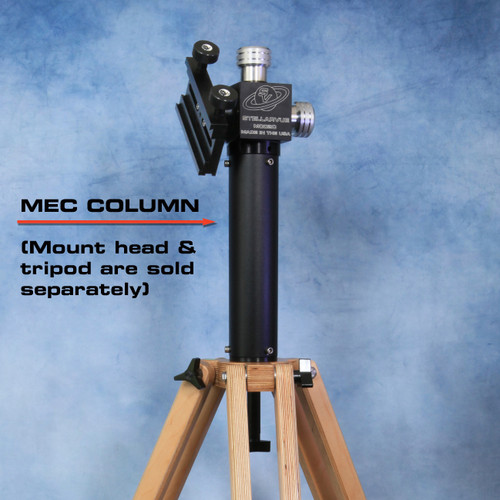