The mission of Stellarvue is to inspire a healthy interest in science and astronomy by handcrafting the finest telescopes on the planet.

Stellarvue is more than just a telescope company. Since 1998, Stellarvue has fostered a global community (a '"Stellar-family") of employees and customers who are passionate about astronomy, education, and viewing and imaging the night sky through high-quality telescopes. Today, Stellarvue continues to use innovative technology to produce the highest-quality optics that provide exceptionally clear, sharp views or images of celestial objects.

Every Stellarvue apochromatic triplet telescope takes about one year to produce. Most of this time is spent precision figuring our objectives using a state-of-the-art Zygo phase-shifting laser interferometer to map each wavefront and identify any aberrations caused by machine polishing. Master opticians spend months correcting and perfecting the objectives in order to make them as perfect as possible. Click here for a behind-the-scenes look at Stellarvue, as presented through a visit with Sky & Telescope's Dennis DiCicco.

Stellar-family customers serve as ambassadors. Stellarvue wants each telescope operating to original specifications so that the owner can be proud of their telescope and excited to show it off. Click here to see images captured by some members of the Stellar-family.

Optical and mechanical parts are covered by a two-year parts and labor warranty to ensure 100% customer satisfaction.

Stellarvue founder and Ace of Space Vic Maris began a lifelong pursuit of astronomy in the mid 1960s, after reading 'The Golden Book of Astronomy'.

When recalling his earliest memories of astronomy, Vic said, "My father bought me a 60 mm refractor to encourage my interest in science, but that telescope almost ended my interest in astronomy." Vic fought the telescope for several nights, with its wobbly base and defective optics.

After many attempts, the telescope was retired to his closet. "Far too many telescopes sit unused in closets because companies don't create them with the user in mind. If a telescope is not easy and enjoyable to use, it cannot do what it should; telescopes ought to foster a greater appreciation for the universe."

In spite of his first telescope, Vic continued to be interested in the night sky. "The pursuit of astronomy has given me some inspirational experiences. I sincerely appreciate all of those people who helped me along my way.” Vic was also lucky to live in Southern California, where some of the best telescope makers were close by and willing to mentor him.

After graduation, Vic excelled in a career working for California State Parks as a ranger and later, a superintendent. He worked for Parks for 30 years, during which time he set up educational star-gazing programs and also helped establish the Robert Ferguson Observatory.

As Vic neared retirement, he taught astronomy for fun in Sacramento, and his students encouraged him to make high-quality, reliable telescopes. With this encouragement, Stellarvue started in Vic's garage back in 1998. Since then the company has grown exponentially and has produced thousands of hand-crafted telescopes with exceptional optics. 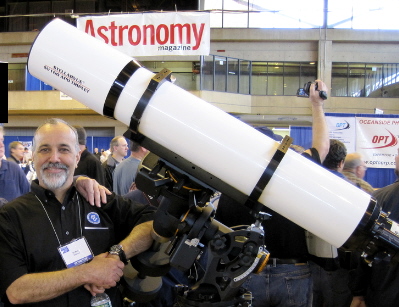 "I have enjoyed introducing thousands of people to astronomy for the past 55 years. Many of these people have purchased a poorly-made department store telescope, the nightmare of any budding astronomer. It is unfortunate that so many telescopes are made to reach a low price point. This is what inspired me to create Stellarvue. This is a small telescope company dedicated to introducing people to the night sky and providing them high-quality, optics that are figured right here in our shop. This has always been more a labor of love than a commercial endeavor. Anyone who has been truly inspired by the majesty of the night sky knows exactly what I am talking about." - Vic Maris