The Trius SX-694 monochrome CCD camera is fitted with the Sony EXview ICX694AL high resolution sensor, with an array of 2750 x 2200 (15.98 mm diagonal), 4.54uM square pixels. This medium format Grade 1 or better CCD chip has a peak QE of 77% in yellow light, and 65% at 656nm. Anti-blooming on the ICX694 is very effective, with minimal effect on linearity and no lost active area. Its extremely low dark signal of less than 5 electrons RMS makes dark frames on most deep sky objects a thing of the past. In fact, read out noise is usually only 4 e-!

Take a look at the rear of the Trius SX-694 and you will see three (3) mini USB ports! That’s enough to run a Lodestar or Superstar autoguider and SX filter wheel. Other ports on the rear of the SX Trius camera include a USB port, a Guider port, and a 12V plug. Single cable control and fast download times of approximately 5 seconds at full resolution is achieved via the high speed USB 2.0 interface. A USB cable is supplied in the SX-694 package, as is a 115VAC power supply.

The Starlight Xpress Trius SX-694 includes a regulated set-point cooling supply with two-stage thermoelectric cooler that supplies a minimum CCD temperature of approximately -40C below ambient. The SX Cooling Enhancer Fan, included with all Trius cameras, adds extra cooling power when the night air is still and air is not circulating very well.

The CCD chamber of the SX Trius camera is Argon-purged to keep moisture from forming on the inside of the window. The window itself is made of fused silica, which offers better heat transfer properties than regular glass. This feature keeps the outside of the sensor window from gathering moisture. It is proven that a dryer window, both inside and out, makes for a happier astro-imager!

The Trius body is rugged and extremely compact, with a diameter and length of less than 3”. It is also light weight at just 14.1 ounces. The back focus is approximately 17 mm (+/- 1 mm).

Made to be powered and controlled via a single USB cable, the Starlight Xpress MIDI is the most recent in a line of popular USB filter wheels. A Slimline Off-Axis Guider integrated into this filter wheel is ideally suited for use with Lodestar X2 or Ultrastar guide cameras and can be employed on other autoguider brands as well.

When this MIDI Filter Wheel joins forces with this Starlight Xpress Trius Pro 694 CCD Imaging Camera, the resulting total back focus distance is 55 mm, a perfect fit for several focal reducer/flattener equipped refractors. The camera side features a male T-thread input adapter for compatibility with cameras from other manufacturers, while the included M48 female adapter can be used with the female T-threads found on the telescope side.

The Starlight Xpress Lodestar Pro is a very compact guider which is powered and operated via a single USB2.0 computer connection. The Lodestar Pro also provides an opto-isolated output connection for direct control of most mounts via their Autoguider sockets. This output is compatible with the ST4 style of RJ12 connection and supplies 4 pull down direction lines and a common return. Alternatively, you may send the mount control signals via a serial connection from the guider control computer. The LodeStar Pro includes a USB cable and an ST4 cable.

The SX Lodestar Pro utilizes a very sensitive Sony ‘ExView’ CCD (the ICX829) with an array of 752 x 582 pixels in a ‘half-inch’ format. Although the chip is not cooled, it has a very low dark signal and very little readout noise, so it can be used to guide on faint stars that are beyond the reach of webcams and CMOS chip based guide cameras. Because of the high sensitivity and high dynamic range characteristics of the Sony ICX829, the Starlight Xpress Lodestar Pro makes a superb electronic finder and planetary imaging camera as well as a splendid autoguider! 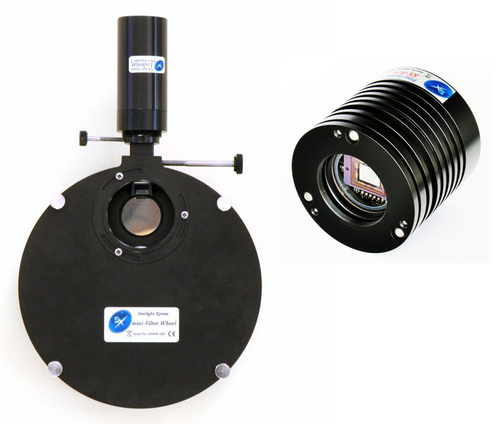